November 16, 2018
Few religions are definite about the size of Heaven, but on the planet Earth the Book of Revelation (ch. XXI, v.16) gives it as a cube 12,000 furlongs on a side. This is somewhat less than 500,000,000,000,000,000,000 cubic feet. Even allowing that the Heavenly Host and other essential services take up at least two thirds of this space, this leaves about one million cubic feet of space for each human occupant- assuming that every creature that could be called ‘human’ is allowed in, and the the human race eventually totals a thousand times the numbers of humans alive up until now. This is such a generous amount of space that it suggests that room has also been provided for some alien races or - a happy thought - that pets are allowed.
Terry Pratchett, The Last Hero 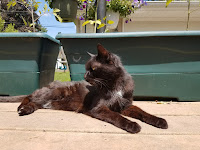 I have been thinking of pets, and why we invite these furry little beings into our lives, and why it hurts so bad when they leave.  It is stupid of us, like volunteering to carry a grief time-bomb; whether they get struck by a car or if they just get too old, eventually having a pet will break your heart.


When my father in law passed away a few years ago, it was a terrible and dark time in our house; everything done or said was tinged with loss and grief.  Our cat, Cornflake, was nearly twenty and had been showing signs of her age setting in.  One night I held her and petted her and I whispered, "I'm sorry old girl, but you're going to have to hang in there for a while longer." I was scared that she would go too, and add to our loss.  It might seem stupid of me, because obviously the loss of a pet is nothing in the face of the monumental and life altering grief and pain that my wife was already going through, but when you are trying to care for someone that is completely fragile, experiencing pain that is impossible to relieve, you are wary of anything at all that might break them.

She was a rescue in the truest sense of the word, found, alone, in a field that my brother in law was clearing.  It was a miracle of sorts, that he saw such a tiny black kitten in the brush and grass, that he stopped the machine he was operating and found her.  He didn't want a cat, he thought, but maybe his sister might.

It was my nephew that named her, when he was just a little kid himself, and when he was asked why he chose that name, he said simply, "I like cornflakes."

She had to be bottle fed, the kitten; she was just a tiny wisp of black fur, small enough to fit in a tea cup, and so my wife took her into work with her and fed her.  This was all before I was around, but I imagine it to be the cutest thing possible, how could it not be?  My wife is adorable on her own, but bottle feeding a tiny kitten?

Cornflake was fierce and intolerant of strangers.  When I first came to visit, Sheri and I were desperately trying to pretend that there was nothing romantic happening between us. How could it be, with us living thousands of miles apart?  So when I stayed, it was on the couch.  The first night, I went to go to the bathroom, where I found an angry black cat sitting on the toilet seat, hissing and swiping at me.  I ended up having to knock on Sheri's closed bedroom door and telling her, somewhat embarrassingly, that I needed her to come get her cat so I could go pee.

She would hide and lash out at you if you were unwary. She would swipe at you from on top of the refrigerator, or from under the couch.  Many a midnight trip to the bathroom would be punctuated by an exclamation: "Damn cat! You scared the hell out of me, you little shit!"

When my wife was pregnant with our boys, Cornflake would sit close and purr, and the boys would kick.  She watched them grow, and begrudgingly loved them, I think, in spite of herself.  Perhaps she witnessed us feeding them, something that could melt even the grumpiest of cat's hearts.

People would come around sometimes and see her aloofness and fury as a challenge.  Animals love me, they would tell me, only to go home in defeat, their ears still ringing with yowls and angry hisses. After a decade or so, it became apparent to the cat that I was actually done sleeping on the couch, that I was not leaving, and she accepted my presence.  We reached an agreement; it was clear that we both loved Sheri and that both of us were not going anywhere, and so a deal was struck, a kind of tenuous truce between enemies with a common goal.

Recently, some of her inner fire had cooled. She had taken to sitting near me, letting me pick her up, allowing me to comfort her. Cornflake never became our cat, though, not in the fifteen or so years I was around her. She was a one person cat; she was Sheri's and Sheri's alone, and a marriage and a growing family never changed that.

Perhaps it is stupid to invite these beings into our lives, these creatures that become a part of our family, that insinuate themselves into our lives so thoroughly that it is difficult to imagine a house without them.  Maybe in the end, though, it is still worth it.

Last night, I whispered to her that it was okay, she didn't have to hang on any longer.

And now we have to say good bye.

We have other pets: two dogs, a tortoise, and a cockatiel.  Barring injury or illness, the tortoise is expected to live eighty to a hundred years.  My son should be able to pass it on to his own grandchildren, if they so choose; the tortoise will certainly outlive me.  If you are looking for a pet, I recommend a tortoise.

Having a cat will break your heart, eventually.

Popular posts from this blog

We Would Be a Song

March 16, 2018
I seem to define my life with soundtracks, playlists that encompass epochs or periods of change or development.  My earliest music was my mother's: Van Halen and Judas Priest, Def Leppard and AC/DC.  I remember a friend of hers explaining to second grade Ralph that the big balls that Angus was singing about were parties, but even then I didn't buy it.  My teen years were heavy on grunge, Nirvana and Alice in Chains and Soundgarden, and that was the first time that music ever felt like it was mine , that I discovered by myself or through the radio, or like minded friends, that was the first time that I took it and owned it and loved it, and even now I'll hear Black Hole Sun or Rooster or Smells Like Teen Spirit on the radio and back I go. In the fifth grade, I moved to Kelso, Washington. I want to say that it was hard, but what I remember mostly from childhood is just this sense of taking every day as it arrived.  What else do we have except our own experiences to measure th
4 comments
Read more

July 31, 2019
Out there in the darkness, something is circling us. something cold, something terrible.  It circles us, and sometimes, it takes one of us. Punks tend to have a short lifespan. We die early, through overdose or violence, through neglect or disease.  And we die of suicide. It happens. Way too often, it happens. It is patient, this terrible thing, it waits.  We huddle together around the light we created for one another. The thing hates the light, but there is just too much darkness, and the terrible thing whispers, and sometimes, one of us, we listen. We come to punk in self defense; in many ways it is a reaction, a response to a hostile and uncaring world.  Hardly anybody comes to punk as an adult. You don't come to punk because you are well adjusted . You come to punk because you're fucked up. You're fucked up and angry and young, and then you hear a song, and the sound sounds like you feel, and the words speak like you feel, and you realize that someone out t
2 comments
Read more

End/Beginning of the Year House Cleaning

January 10, 2018
So its been a while huh?  Usually if I spend a long time away from writing, it is because I am either feeling pretty content, or because I have been busy. In this case it is both. I have been busy, both with the holidays and related events, and with the pay job, and also I have been working on a super secret surprise mystery project that I am not quite ready to talk about, but it is cool as hell and I'm stoked to bring it out and wave it around and harass my family and friends to tell me what they think and to tell everyone that they have ever met to check it out. But that is later. It is 2018, folks. Twenty. Eighteen. Since I am so behind in everything, I figured I would just blob everything together in one big-ass beginning of the year/end of the year rant/review/announcement pile of words and see where it goes.  Let's just jump in shall we? --  Unbelievable, but I'm turning forty years old in August, an age that I wasn't sure I was ever going to see, and one that I
6 comments
Read more